The mystery of Monna Lisa 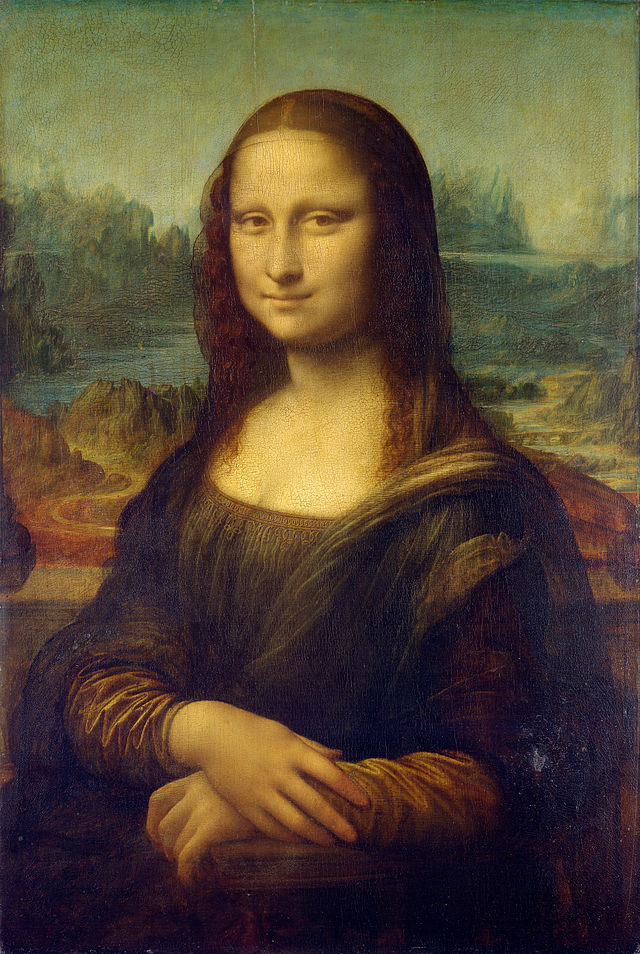 While we are quite sure about the answer to the latest question, the mystery remains for the first one.

For a curious joke of the destiny, one of the most famous paintings in the world remains unknown in its profound essence.

We known that a painting called La Gioconda existed, because it is mentioned in a document discovered in the Archivio di Stato di Milano in 1990, which dates back to 1525 (cfr. J. Shell, G. Sironi, Salaì and Leonardo’s Legacy, in “The Burlington Magazine”, february 1991, pp. 95-108).

When Salaì died, his two sisters took his legacy and made an inventory to divide the goods. In this inventory we read, among the other things:

So there is evidence that a painting referred to as la Ioconda was in Salaì’s legacy at his death. Shell and Sironi then speculated that Salaì returned with him Leonardo’s paintings from the Château du Clos Lucé (cfr. J. Shell, G. Sironi, Salaì and Leonardo’s Legacy, in “The Burlington Magazine”, february 1991, pp. 95-108).

We also know, from a report of Antonio de Beatis, secretary of the cardinal Luigi d’Aragona, that Leonardo showed to these guests three paintings, when they visited him on October 10 1517 in Cloux.

(…The Lord went to see with me messer Lunardo Vinci florentine, more than 70 years old [Leonardo was 65], excellent painter of our time, who showed to his illustrious eminence three paintings: one of some florentine woman, natural made at the instance of the late Magnificent Jiuliano de Medici; the other of the youth San Joanne Baptista, and one of the Madonna with the child, sitting on S.ta Anna: all the most perfect). 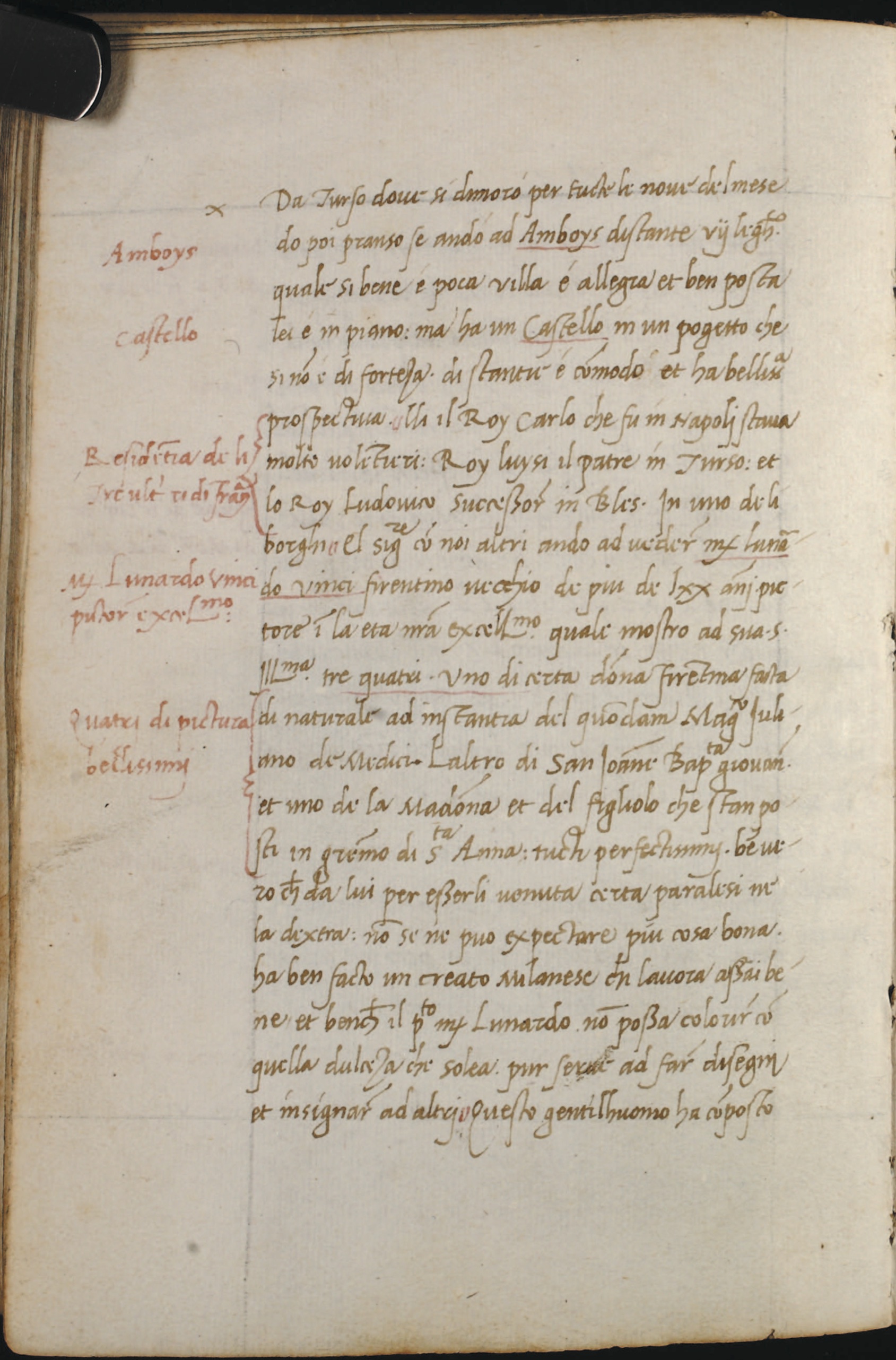 While we could recognize in this account of the visit two paintings now at the Louvre (St. John the Baptist and The Virgin and Child with St. Anne), there is no certainty about the first painting.

The painting mentioned in the Salaì’s testament as “quadro de una dona aretrata” (literally, painting of an arrear woman), is highly estimated: 100 scudi and 500 soldi. It is interesting to note that this price is twice that of two diamonds and twice that of an emerald that are included in the same inventory. Since this was a very high amount of money, it was speculated that maybe this painting was the original Leonardo’s artwork.

Just to feed the confusion, a document discovered in 1998, always in the Archivio di Stato di Milano (cfr. V. Longoni, Umanesimo e Rinascimento in Brianza. Studi sul patrimonio culturale, Milano 1998), dated December 28 1531, includes a list of nine paintings that Lorenziola (a Salaì’s sister), gave to Ambrogio da Vimercate as a pawn for a debt with Gerolamo da Sormano. In another document (cfr. E. Villata, Leonardo da Vinci. I documenti e le testimonianze contemporanee, Milano 1999), these nine paintings, which included the so called Gioconda, are estimated only 241 lire imperiali (equal to 26 scudi), while in the 1525 inventory they were evaluated 1590 lire imperiali (equal to 315 scudi). The question arose whether these paintings were copies made by Salaì, and not Leonardo’s originals.

Another document, found in the Archives Nationales of Paris (cfr. B. Jestaz, François Ier, Salaì et les tableaux de Léonard de Vinci, in “Revue de l’art”, 126, 4, 1999, pp. 68-72), reports a very high amount payment, for the years 1517-1518, of 2604 lire tornesi, from the King’s treasurer Jean Sapin, to “messire Salay de Pietredorain” (gentleman Salaì di Pietro d’Oreno) “pour quelques tables de paintures qu’il a baillées au Roy” (for some tables of paintings that he leased to the King). Villata and Marani (cfr. E. Villata, Leonardo da Vinci. I documenti e le testimonianze contemporanee, Milano 1999 and P. C. Marani, in F. Viatte, V. Forcione, Dessins et Manuscrits de Léonard de Vinci, Parigi 2003) pointed out that it could be very strange if Salaì had making money for himself by selling some Leonardo’s paintings to the King, Leonardo alive, considering also that Leonardo has a fixed salary from the King (700 scudi per year, as reported by Pedretti, 1957).

So we cannot exclude that Leonardo’s paintings, Monna Lisa included, did return back to Milan somewhen between 1525 and 1531.

Maybe the painting mentioned in the 1525 inventory is really Leonardo’s Monna Lisa. According to Giorgio Vasari‘s life of Leonardo (cfr. The Lives of the Most Excellent Painters, Sculptors, and Architects, from Cimabue to Our Times) “Prese Lionardo a fare per Francesco del Giocondo il ritratto di mona Lisa sua moglie; e quattro anni penatovi, lo lasciò imperfetto; la quale opera oggi è appresso il re Francesco di Francia in Fontanableò” (Leonardo started to paint for Francesco del Giocondo the portrait of his wife Lisa; and four years having trouble with it, he left it unfinished; that work is now with King Francis I of France in Fontainebleau).

We do not know if Vasari did ever see the painting (maybe if and when it was returned back to Milan in 1524-1531 with Salaì), but he cites the eyebrows of the woman, while the Monna Lisa has no eyebrow. According to the Anonimo Gaddiano though (1540), Leonardo made a portrait of Francesco del Giocondo; this seems to contradict Vasari’s account of the story. Giovan Paolo Lomazzo cited in 1584 “il ritratto della Gioconda e di Monna Lisa” (the portrait of La Gioconda and of Monna Lisa, hence two different paintings), and in 1590 “il ritratto di Monna Lisa napoletana” (the portrait of neapolitan Monna Lisa) located “nella fontana di Belao in Francia” (in the Belao fountain in France).

Moreover, if we trust the account by Antonio de Beatis from his visit to Leonardo in 1517, maybe he is not speaking about the Monna Lisa, since he writes about a portrait of a florentine woman made by Leonardo upon commission by Giuliano de’ Medici, who was Leonardo’s patron in Rome in 1513-1515, and not by Monna Lisa’s husband, Francesco del Giocondo, as Vasari reports.

According to Franck Zöllner (cfr. F. Zöllner, Leonardo’s Portrait of Mona Lisa del Giocondo, in “Gazette des Beaux-arts”, 1490, march 1993, pp. 115-138), Leonardo was relatively free of commitments from the end of 1502 to the summer of 1503, so he could accept Francesco del Giocondo’s request to paint a portrait for his wife.

It is also possible that Leonardo effectively worked more than four years on the painting. At this regard, there is a drawing made with red chalk, now in the Royal Library at Windsor Castle (n. 12409 recto), depicting a storm on a valley (maybe a view of the Valtellina) that could be related to the mountains to the left of Monna Lisa (cfr. K. Clark, The Drawings of Leonardo da Vinci in the Collection of Her Majesty the Queen at Windsor Castle, second edition revised with the supervision of C. Pedretti, London 1968), dated around 1499-1500, or 1506 (cfr. M. Kemp, in Leonardo da Vinci, editors M. Kemp and J. Roberts, London 1989) or 1500-1502 (cfr. Pedretti).

It has been argued that Leonardo’s continued working for many years on the painting, considering the similarity of the landscape of the Monna Lisa with that of the St. Anne of the Louvre (which is dated 1510-1513). There is a drawing in the Codice Atlantico in the Biblioteca Ambrosiana of Milan (fol. 864 recto, ex fol. 315 recto-a), dated around 1513-1515, that shows a study for a left eye and some strands of hair that could be related to La Gioconda (cfr. C. Pedretti, The Codex Atlanticus of Leonardo da Vinci. A Catalogue of Its Newly Restored Sheets, parte seconda, New York 1979).

Enea Hirpino wrote (cfr. Canzoniere, 1520) about a portrait of Costanza d’Avalos, duchess of Francavilla, made by Leonardo, who painted “lei sotto il bel negro velo” (her under the beautiful black veil), so her name can’t be excluded from the hypotheses.

Carlo Pedretti proposed (1957) to identify the woman in the painting with Pacifica Brandano, that died in childbirth in 1511 (the son was the future Cardinal Ippolito de’ Medici, only illegitimate son of Giuliano de’ Medici). Maybe what De Beatis and the cardinal saw was not La Gioconda, but the portrait of a naked courtesan, Pacifica Brandano, since he writes “facta di naturale” (made as natural) that indeed could be interpreted as nude. A model for the painting could be see in a cartoon (Monna Vanna?) now at Musée Condé in Chantilly, which has some painted versions (cfr. D. A. Brown, K. Oberhuber, Monna Vanna and Fornarina. Leonardo and Raphael in Rome, in Essay Presented to M. P. Gilmore, edited by S. Bertelli and G. Ramakus, Firenze 1978, pp. 25-86). 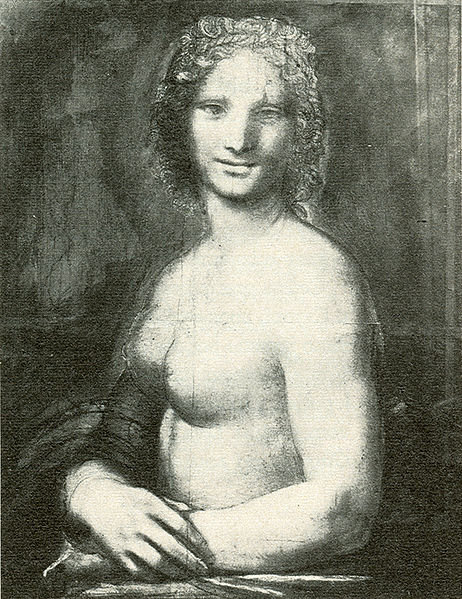 Cartoon of a nude woman after Leonardo’s lost original? – Musée Condé in Chantilly – This painting is supposed to come from Leonardo’s workshop. Some experts claim that it was painted after the original that Leonardo made for his patron Giuliano de’ Medici.

Tanaka argued that the woman of the painting could be Isabella d’Este (cfr. H. Tanaka, Leonardo’s Isabella d’Este. A New Analysis of the Mona Lisa in the Louvre, in “Annuario dell’Istituto Giapponese di Cultura in Roma”, 13 1976-1977, 1977, pp. 23-35). Pedretti, following the above cited report from de Beatis (he wrote that the day after the visit to Leonardo he saw a portrait in Blois, not so beautiful as that of “signora Gualanda”), made the hypothesis that the woman could be Isabella Gualanda, born in Naples in 1491 from a pisan family (cfr. C. Pedretti, Leonardo. A Study in Chronology and Style, Londra 1973 and C. Vecce, Leonardo, Roma 1998 and C. Vecce, La Gualanda, in “Achademia Leonardi Vinci. Journal of Leonardo Studies and Bibliography of Vinciana”, vol. III, 1990).

Finally, we don’t even know how the painting came to King Francis I. We know that King Francis had a great consideration for Leonardo. Benvenuto Cellini wrote in his Discorso sull’Architettura “Io non voglio mancare di ridire le parole, che io sentii dire al re di lui, le quali disse a me, presente il cardinal di Ferrara e il cardinal di Lorena e il re di Navarra, disse: che non credeva mai, che altro uomo fosse nato al mondo, che sapessi tanto quanto Lionardo, non tanto di scultura, pittura e architettura, quanto ch’egli era grandissimo filosofo” (I do not want to miss to refer the words, that I heard from the King about him, that he told me, at the presence of cardinal of Ferrara and cardinal of Lorena and the King of Navarra, he said: that he did not ever think another man was born in the world knowing so much as Leonardo, not considering sculpture, painting or architecture, but because he was a very great philosopher).

Despite the tradition tells that the King paid for this painting, there is no proof at all for this claim. This is so incontestable that the Louvre official website too has to admit that “It was eventually returned to Italy by Leonardo’s student and heir Salai. It is not known how the painting came to be in François I’s collection“.

Then, if no sensational document will appear from some archive to reveal the truth, the secret of Monna Lisa will remain with Leonardo. 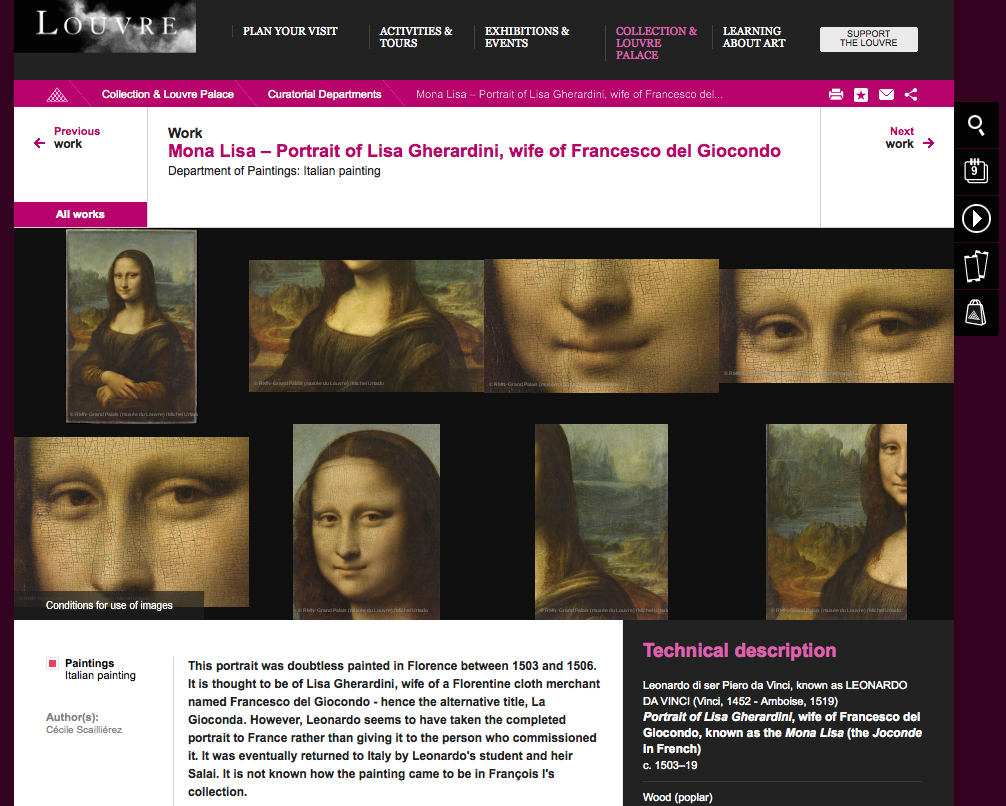 This entry was posted in Firenze. Bookmark the permalink.

2 Responses to The mystery of Monna Lisa

Create a website and earn with Altervista - Disclaimer - Report Abuse